The spiritual will of Carmen Hernandez, founder of the Neocatechumenal Way

The work of evangelization by Carmen Hernandez, founder together with Kiko Arguello of the Neocatechumenal Way, continues from the sky. One year after his death, will be published in Spain the book “Diarios”, a collection of memoirs that the initiator wrote over the years

These diaries have been a total and absolute surprise for everyone. A somewhat upsetting revelation, first of all to Kiko Argüello, who has shared with her the genesis, guidance and progressive growth of the Neocatechumenal Way for over fifty years. In a relationship that now, with astonishment just as gratitude, he calls “an awesome mystery.”

The book is about Carmen Hernandez, co-initiator of an ecclesial reality that today has 25,000 communities, in over six thousand parishes of 128 countries, hundreds of missionaries ad gentes formed by small families of families with many children and at least one priest, 113 diocesan seminaries Redemptoris Mater. The volume Diarios 1979-1981 collects in 340 pages the secret confessions of Carmen, which came to light after its “birth to heaven” exactly one year ago, July 19, 2016, at age 86. 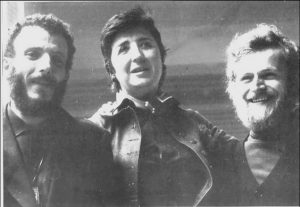 … that of the notebooks, jealously guarded by Carmen for over thirty years, of which the book just released in Spanish hosts just the first three. The original edition saw the light at the end of June for the prestigious Biblioteca de Autores Cristianos, which since 1944 publishes sacred texts, Church Fathers, and works of religious inspiration from the greatest authors of all times. The cure and critical apparatus of the texts is to Ezechiele Pasotti and Francisco Javier Sotil.

The surprise of the 797 notes, written very often at night and in all parts of the world, comes precisely from their content. An almost daily sequence of intense personal dialogues with Lord, revealing an existential itinerary marked by deep suffering and a certain spiritual restlessness. But, therefore, the expression of a granitic faith in Jesus Christ and in His Church, both subject to love and fidelity, despite the contrasts and the trials caused by the rising work that the Holy Spirit was inspiring.

Nobody in the world…

… much less Kiko, who for more than half a century has shared side by side with a ceaseless commitment to evangelization, had had the slightest sense of what Carmen lived in his intimate, also this mystical vehemence so fruitful, even in literary terms. Particularly of the never-ending inner combat and of the repeated experiences of “dark night” first described by St. John of the Cross. An unbroken cry and a call for endless help: in the diaries there is not even a page in which the author does not repeat his request to his Lord to visit her, to console her, to show himself alive and merciful.

In the manuscript the invocation is always in uppercase letters. And it comes from a certainty: “If you are not, there is nothing.” In his public confidences after the finding of Carmen’s notes, Kiko repeatedly recalled that his knowledge of the woman whom Providence had placed next to him had been much more different while she was alive. 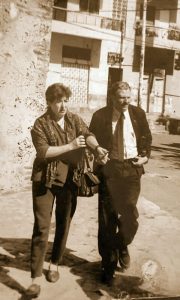 Lastly he spoke on June 30 concluding the official presentation of the work at the University of Madrid, Francisco de Vitoria. At first, he recalled, in the merits of Carmen Hernandez, that she had inculcated on the Neocathecumenal Way the rediscovery and appreciation of the Easter Vigil, lived entirely throughout the night, which Pope Francis recently called “a gift made to the Church” by Neocatechumenal communities. Speaking of Diaries, he added: “Of Carmen I knew the controversial impetus towards me, the discussions we had and of which everyone was spectators. She often criticized me, calling me unbearable. But at the same time she was always beside me. And now I understand the freedom that she had with me, with the path, the Church, and everybody. A freedom that came to her from a profound relationship with Jesus Christ.

CLIC HERE TO BUY IN ITALIAN