Neocatechumenal Icons: Virgin of the way

The icon of the Virgin of the Way, also called Kikkotissa, which Kiko Arguello painted in 1973, is inspired by an icon located in the monastery of Kikko in Cyprus. The Arguello realized his icon in Paris from ablack and white reproduction of the Kikko icon, which he saw in a book of orthodox icons of which he completely ignored the origin. Tradition says this Kikko’s Madonna was painted by the Apostle Luke. 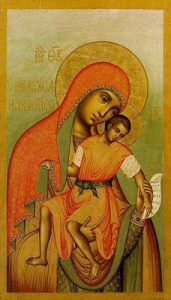 It is said that, thanks to a monk called Isaiah, who lived in the mountains of Troodos in the island of Cyprus, the icon was preserved and venerated. Byzantine Emperor Alejo I Commeno (1081-1118) had a daughter who suffered from a rare incurable illness. Isaiah spoke to the emperor and told him that his daughter would be healed if he had built a monastery (on those mountains of Troodos) and then donated the icon of the Madonna he had in his palace.

Thus in 1100, the construction of the monastery of Kikko was inaugurated and there the icon of the Virgin was placed there, while the emperor’s daughter healed. 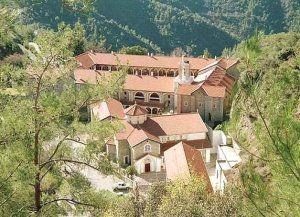 The monastery is of orthodox rite. For Orthodoxy when something is very sacred, it must be covered. So the icon is covered with a silver coat and a cloth.

What attracts attention is that the Madonna and the Child look in the same direction on the left, where the sinners (goats) are, as in the final judgment of the gospel of Matthew chapter 25, 31-33. The mission of the Virgin and Child is to save sinners.

The icon that painted Kiko is not so big as it can be seen in reproductions, but small (21 × 30 cm). You can contemplate it in a chapel of the Alcudia cathedral in Madrid.